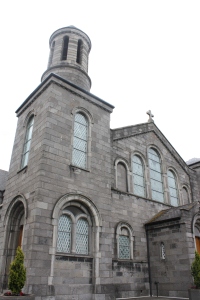 Many people go to Ireland to drink, look at the lush green landscape, have another drink, and fantasize about ancient Celtic culture as they understand it from Renaissance festivals. Often, the turbulent nature of Irish history, as is the case with much of history, goes ignored. Ireland has suffered tremendous oppression and violence, as well as poverty and disease. This can be seen in the capital city’s cemeteries. Glasnevin Cemetery, in Dublin, holds 1.5 million bodies, and the population of Dublin is 1.2 million; there are more dead Irish in one cemetery alone than there are living in the entire city. For a brief time during the Famine in the nineteenth century, fifty percent of the population of Dublin died before reaching the age of eighteen, dying in the slums which were considered among the worst in Europe.

With these and other atrocities in mind, outraged and lamenting Irish citizens formed organizations to counter and ultimately oust British rule over the island, and as a result, hundreds died in a bloody insurrection in April and May of 1916. A civil war followed the negotiated partition of the country into two halves, and sectarian violence from both Catholic Republicans and Protestant loyalists continued well into the latter half of the twentieth century. Some Irish and Northern Irish citizens were targeted only for their religious conviction, and bombings became commonplace in Ireland, as is the case in Iraq, Afghanistan, and Syria today.
Issues surrounding commemoration involve a shared place but not a shared memory. Many Catholic citizens have an emotional stake in keeping the memory of British oppression alive, while many loyalists want Ireland to acknowledge that the IRA committed atrocities against innocent Protestants. A historian told me today that when the meaning is stripped away from history, all that remains is a list of the dead, the one universality that all remembrances share. Thousands of people died in Ireland fighting for what they believed was a just cause; the reasons for the conflict are still disputed today, and there is no concurrence regarding who should be blamed, resulting in a society where one figure can be a villain and a hero at the same time, in the same region, even in the same pub. Keeping intact a divided country is still a challenge, and historiography plays a major role.

The Irish façade of beer and merry musicians is a part of Irish history, as my cabby made clear to me when he discussed the many gigs he has played in Irish pubs. But he was also frank in explaining the problems of remembrance, the survival of the Irish language, and the Irish emigration during the Famine years. This is not a place that can possibly live up to the façade for which so many tourists come. This is a place where, as we approach the hundredth anniversary of a century of violence and conflict, the complexity of a shared atrocity across sectarian lines is unavoidable, no matter how many ridiculous T-shirts one buys.