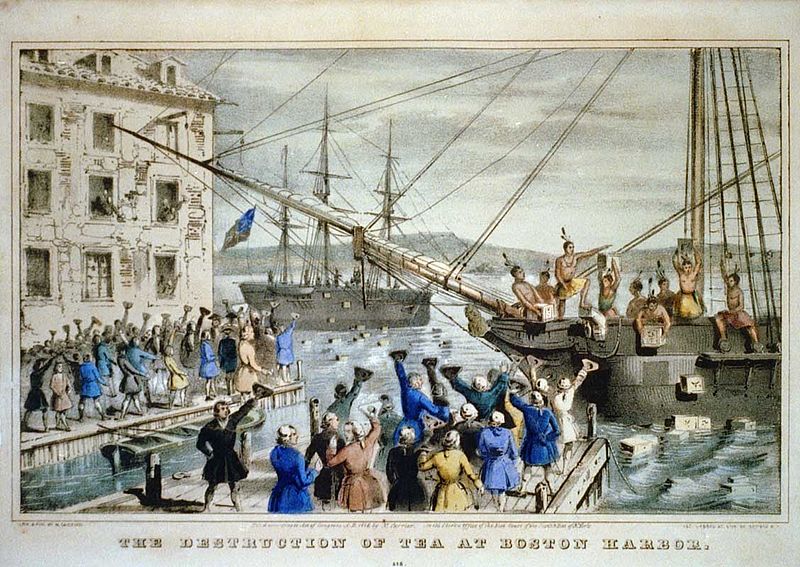 The Destruction of Tea at Boston Harbor, by Nathaniel Currier, 1846, Hand-Colored Lithograph

On December 16, 1773, the Sons of Liberty checked their phones for messages about the plan. Some Tweeted about it as they crept on board the British ship; others posted Instagram pictures of the tea crates they dumped into the Boston Harbor, one after another. #coffeefromnowon. #revolution. #dumptea. Throughout the night, several Sons posted updates on the SoL Forum. Meanwhile, crate after crate of imported tea splashed into the salty, frigid water.

John Adams live-tweeted the affair with considerable criticism, but a new hashtag surfaced: #sitdownjohn. Frustrated, he stayed inside while the protest unfolded. Several Native American pages posted their own frustration that the Sons of Liberty were dressing up as Mohawks, pointing out the inaccuracies and retribution the British might take against them, but the protest continued unabated. Some tagged King George in their posts.

A week later, Sons and Patriots returned home for Christmas. The media expressed a disorganized uproar about the protest, with Loyalist blogs calling the Sons of Liberty terrorists and the Sons of Liberty tagging everything #donttreadonme and #goteabagyourself. Some Sons returned to divided families: a Loyalist cousin here, a Quaker moderate in-law there.

It was particularly awkward at the Adams Christmas Party. Refusing to yield his position, John spent the entire time standing up, while his cousin Sam spent his time in a corner liking and retweeting every post of a tarred-and-feathered British tradesman. John called it grotesque of him to like so much shaming; Sam told him to stop shaming him for his views. Sam pointed out that John defended the Red Coats after the Boston Massacre three years earlier, calling him out for defending people who killed Americans; John called out Sam for passively defending a whiny group of protestors. Meanwhile, Abigail Adams drank whiskey in the billiard room and thought very seriously about tarring and feathering both John and Sam. She was, after all, ashamed of both of them. They liked the shock and awe of sharing listicles reinforcing their stances, like preaching to two different choirs. “Ten Horrible Things King George Has Done in Ireland,” “Nine Ways the Revolution Fails at Intersectionality,” “You Won’t Believe the Feathers on This Loyalist Cuck.”

Abigail had visited a Boston general hospital weeks earlier after a tax collector she had befriended was tarred and feathered at the docks. She remembered the way the hot tar stuck to his skin, the difficulty of pulling it off, the way it stuck to doctors who tried to remove it, making him untouchable, unapproachable. He refused to speak to Abigail for her husband’s politics, and instead stared at the ceiling while doctors treated his burn wounds.

Sam called John a feisty little tea drinker, and John called Sam a caffeinated warmonger. They were on the verge of tarring each other right there at the party, and if they did, Abigail knew that she would pull the dried tar from both morons while they lay side by side, listening to each other’s crying. Even that, she posted on Tumblr passive aggressively, wouldn’t get them to meet one another halfway.

A photo I took exactly three years ago.

I don’t tend to celebrate anniversaries. I don’t actively celebrate my birthday and I ignore my country’s independence day. But WordPress insists on reminding me that I started this blog three years ago, and I may as well mark the occasion.

Since my last blogiversary, I’ve attended a rad academic conference in Albuquerque, had poems, a short story, and a nonfiction essay published, and visited multiple national parks. I’ve completed a draft of my creative writing Master’s Thesis, a collection of interconnected short historical fiction stories (is there a more pretentious phrase? If so, I’ll find it), as well as poetry collections and essays. My writing has improved (I think), and I’ve developed a better understanding of literature.

I’ve also been in Nebraska for over a year, and my relocation here has started to set in. I’m finding a community in Lincoln. I’m forming connections with friends and colleagues. Sadly, I may be leaving again for another graduate program. Once again, I’ve decided to apply to graduate programs to pursue either a PhD or MFA program, and once again, I have no idea where I’ll be living a year from now.

Wherever I am, wherever I will be, wherever I’ve come from, here’s to three years of fairly sporadic blogging. Cheers, peace, and until another autumn. 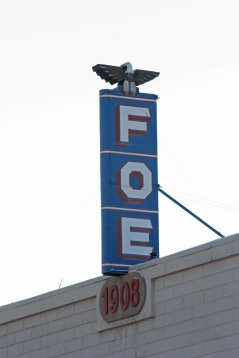 It has come to my attention that there is a slight possibility that some readers of this blog might find my portrayal of writers to be unfair.

It was not my intention to portray writers as living in the excesses of caffeine, alcohol, or both, or as people who experiment with certain stimulants that some states have outlawed. I did not intend to give the impression that writers are difficult people who have trouble coping with rejection, or that they have limited social skills. I also had no intention of portraying writers as hyper-critical egomaniacs who write for revenge, and who publish unflattering stories about their friends and families when they feel resentful of their almost constant sense of rejection by publishers, friends, strangers, and that guy at the bookstore with the mustache.

Additionally, it was not my intention to portray writers as the kind of people who use creative writing workshops as a means to external validation by submitting work that has already been accepted for publication, to insist upon the value and merit of their submitted workshop material on the basis that it has been accepted for publication, while simultaneously engaging in pretentious, esoteric discussions of craft that have little, if anything, to do with the actual content of their peers’ work, leading their peers, instructors, loved ones, and Rick from the bookstore to question if they ever actually read their peers’ work and merely have a list of bland, useless comments that can easily apply to any written work, or as people who spend their time rubbing their toes on others’ property and rummaging through Rick’s medicine cabinet when he’s not looking, and who drunk text their lovers at 2:34 in the morning while standing outside Rick’s house and wondering why Marsha’s car is there, or as the sort of people who deliberately loan you their sunglasses when they have pinkeye and leave their beard shavings in your glove compartment.

It was not my intention to portray writers this way, but I can understand why some readers might think that I had such an agenda in mind.

While I’m at it, my lawyers inform me I should apologize for my portrayal of historians. Any interpretation of historians, based on this blog, as resentful, conceited, pretentious, hyper-liberal anti-social Harvard rejects who hate their countries and take pleasure in reducing anybody’s joy in holidays to a crime against humanity and who spend their free time burning copies of the U.S. Constitution in their backyards in their underwear in a massive green cloud of pot smoke, is merely a misunderstanding.

As always, I thank you for your concerns about my portrayal of people on this blog.