Yesterday, while wandering the streets of Galway around the river, I found myself in front of a Catholic church built in the 1800s. I stepped inside, eager to explore a tradition with which I was unfamiliar. I had been in Catholic churches before, but only on guided tours with a camera in my hands and a ball cap on my head. This was different. This was an opportunity to find a new experience. 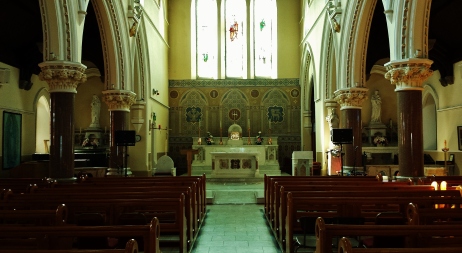 I was alone inside the old church, and the silence was overwhelming in a city that otherwise was suffocated by the noise of traffic, crowds, and the river. I walked past a statue of St. Francis of Assisi, turned toward an organ, and made my way up the church to the front pew. There, I sat down in silence and looked around the bright room, engulfed in its old and magnificent imagery. The silence was almost alarming, as I had hardly a moment of solitude since my arrival in Ireland. I worried that somebody might come in and tell me I was in the wrong place, or ask me how I got past the Swiss Guard. After a while, though, I closed my eyes and listened to nothing, and managed to stop thinking for a few soft moments.

After a while, I opened my eyes, took out my notebook, and wrote a simple, one-page poem. I wrote it slowly, deliberately, one word at a time. I rarely take such care when writing. It was a brief poem entitled “To Whom It May Concern.” I tore it from my notebook, rose quietly from my seat, and placed it on the altar. After that, I left quickly, afraid that I would be caught.

I do not remember the contents of the poem. After I left it on the altar, it no longer belonged to me. It was a gift to the first person to find it. All I remember about it is that I felt satisfied when I finished it, that it was about light, that it ended with the line “Dona Nobis Pacem,” and I signed it “jk.” Perhaps they will think I was joking, or maybe it’ll be thrown away, or maybe it will be read aloud at Sunday Mass by a curious priest. For me, it was out of the ordinary, but I felt peaceful when I placed the paper on the sunlit altar. I’ll never know what happened to that little poem; all I know is that it set sail for uncharted territory just as I did two weeks ago.