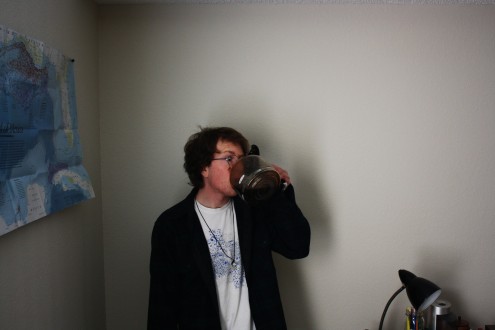 Those who know me know that I love coffee. Those who don’t know me can easily guess, thus far, that I have a moderate fondness for coffee. To be clear, I’m not picky; I like tea, cocoa, water, smoothies, milkshakes, juice. But coffee has a special place in my life.

I had my first cup in my high school cooking class. During one of the baking sessions, our teacher turned on the coffee pot near my station while our muffins were still in the oven. That’s when I had my first cup of caffeinated hot brown acidic water, filled with cream and sugar like most first-timers. After a while, I started drinking coffee whenever I cooked, then every morning, then every morning and afternoon, then several times a day. For a while, I got headaches when I didn’t consume any caffeine by 10:00 AM.

I’ve since become less addicted. I once considered giving it up for Lent but decided that not even Jesus would have gone that far. Nevertheless, I have cut back, and not just because I’ll probably have an ulcer by the age of twenty-six if I don’t.

There are coffee addicts and there are coffee lovers, and I want to be the latter. The difference between a violinist and someone with a violin is making every note a masterpiece. The difference between a chef and somebody who cooks every meal is mastering the kitchen’s tools and ingredients, and cooking with gusto rather than mere hunger. Anything can be an art, and the only way to become an artist is to inhabit a practice so fully that we infuse ourselves with it.

Everything about coffee is perfect to me, and if not I try to make it perfect. Espresso, lattes, dark roasts, light roasts, the smell of the beans, the feel of them in my fingers, the careful measurement of fresh grounds into the coffee pot, pouring the first cup, breathing in the scented steam before the first sip, and feeling it run down my throat hot and fresh, until it bounces around my stomach looking for a place to sit. I write with it; I read with it; I get to know people with it. It’s not for everyone, but it’s certainly for me, which is likely why I haven’t slept since 2015.

What practice or hobby or food do you love? Let me know in the comments!

P.S. If you thought the title was cheap, consider all the other possibilities I had to work with. Drip coffee was only a starting place.

Leaves are changing colors, candy is getting cheaper and oranger, and the farmer’s market is filled with freshly harvested pumpkins. Resisting temptation is hard; now I have a pumpkin. What does one even do with a pumpkin?

The first thing to do is get to know the pumpkin. Give it a cute name, something like Fred. Spend a few nights drinking with Fred. Really get to know him. From there, it’ll be easier to figure out what you want to do with Fred. In my case, I wanted to make Fred into a pie.

Give Fred a good bath, remove Fred’s stem, and slice Fred laterally with a large cutting knife. This might upset Fred, but he’ll just have to learn to live with it. Using a large spoon or ice cream scoop, remove all of Fred’s insides, scraping against the flesh to get all the strands and seeds out. It goes without saying you can save Fred’s inside for later consumption. Dash a little salt onto Fred’s flesh, place his two halves flesh-side down on a covered cookie sheet, and bake at 400 degrees Fahrenheit for about thirty minutes, or until Fred is nice and mushy, like he always gets after a few beers.

Again, using an ice cream scoop or large spoon, scrape out Fred’s flesh, which should come out easily after baking Fred. He may be confused at this point, but just remind him it’s for a good cause. Mash (or blend in a food processor) Fred’s flesh, until it’s nice and smooth. You can store some of Fred’s flesh in the freezer for future endeavors. For example, you can make muffins out of Fred, too.

Toss 1 cup of Fred’s pureed flesh into a sauce pan and cook until it simmers. Add 1 cup milk, 1 teaspoon nutmeg, 1 teaspoon ginger, 1/2 teaspoon cinnamon, and 1/4 teaspoon ground cloves. Feel free to adjust the spices to make Fred as spicy as you like. Fred, of course, prefers to be very spicy, if his sass didn’t tell you anything. Mix well and let simmer.

In a separate bowl, combine two eggs and 1 cup of brown sugar. Add this to Fred’s simmering remains and stir to combine. 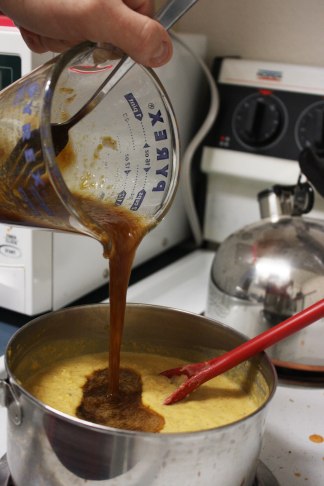 Once the eggs, sugar, cream, and Fred are thoroughly combined, pour into a pie dish with a prepared crust. You can make your own crust (like I did, in a completely unpretentious way), or buy a premade crust. Place the pie dish on a cleaned cookie sheet and bake Fred at 350 degrees for forty to fifty minutes. Fred will be very disappointed, but delicious. You can make it up to Fred by covering him in whipped cream and serving him with hot beverages. Like all gingers, Fred loves whipped cream and hot beverages.