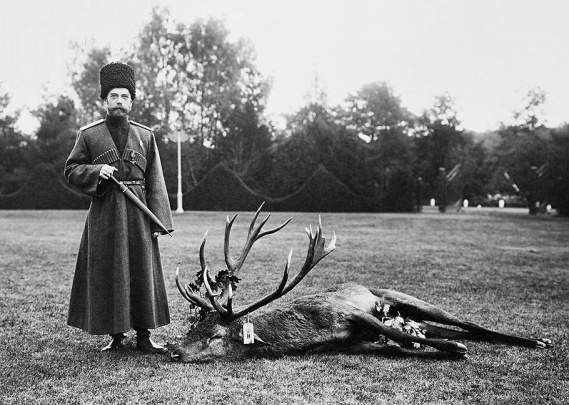 Nicholas II was crowned Tsar at the age of twenty-six in 1894, following the sudden death of Tsar Alexander III. Nicholas inherited a relatively stable regime that he was determined to sustain without change. He grew up believing he had been born simply to preserve the institution of God-granted Russian royalty, to maintain the status quo. Alexander, thinking he would live longer, had not trained Nicholas in diplomacy or politics. Living like a king was all Nicholas knew how to do.

His central policy was autocracy. Nicholas rigidly adhered to a particular image of Russia as ordered beneath and for him, and attacked anything that contradicted his sense of that order. He placed himself in the public eye regularly, but only filtered through artificial expressions of his status. This was clear in the 1913 Romanov Tercentenary, a national celebration of the Romanov dynasty. Virginia Rounding points out that “as many as one and a half million commemorative rubles were issued on the occasion of the tercentenary,” and that Nicholas appeared on numerous stamps and in over a hundred film reels (9-10). The monarchy also granted permission “for the production of scarves bearing a portrait of the Tsar, but only with the proviso that the scarves should not be of the right size to be used as handkerchiefs” (10), because Nicholas did not want anybody blowing their noses on images of him. He viewed himself in religious terms, and treated even petty disrespect as sacrilege.

The Romanov Tercentenary was an elaborate publicity stunt scheduled after numerous disasters under Nicholas’s rein. The Russo-Japanese War of 1904-1905 ended with an absolute Japanese victory, and was considered an unprecedented humiliation for Imperial Russia. In 1905, Russia’s political and economic problems proved that Nicholas II was not the carefree celebrity he wanted the world to believe he was. That year, strikes and protests formed in the capital amid widespread unrest. Nicholas responded to protestors by ordering police to fire on them on January 22, 1905, now known as Bloody Sunday. The Revolution of 1905 put enough pressure on the Tsar to allow for modest state reforms, including the formation of the Duma as a legislative body and the Russian Constitution of 1906. Nevertheless, Nicholas continued to rule as an authoritarian, dissolving the first Duma and manipulating the second. Entering he Great War in 1914 was just one more disastrous move.

The elaborate publicity displays were what Nicholas wanted the world to see of his empire. Instead, he met countless challenges to his authority, to which he responded with oppression or dismissal, sometimes removing ministers who disagreed with him and distrusting many others. By September of 1915, he had taken complete control of the military, leaving the capitol for the front. By 1916, unrest among soldiers had grown such that in April, “orders were issued forbidding free and open exchange between enlisted men and aid workers unless specifically allowed by the military leaders”  (Sanborn 170).

Nicholas was untrained for leadership and unwilling to admit his shortcomings. He took more interest in sports and his family than in political reforms, which he viewed as a threat to his sovereign, divine authority. He had been raised to live as a ruler, but not to rule, and he began ruling at a time when many Russians grew tired of aristocrats flaunting their inherited God-given wealth and silencing anyone who pointed out the problems in the system. When he abdicated the throne on March 15, 1917, Imperial Russia was a lost cause. With his extravagance and sweeping political abuses and abrasive leadership, Nicholas II exhausted Russian statehood to the breaking point.