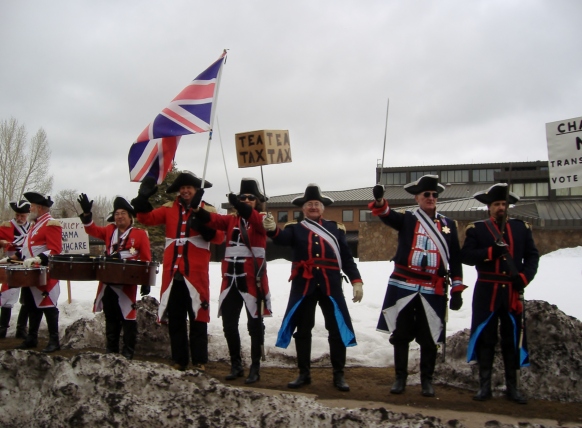 Protestors in Flagstaff, AZ, Winter of 2009, who just so totally accepted (without complaint or whiny over-dramatic public display) the election of Obama, courtesy of Lost Compass Photography.

To begin with, organizers would disagree about who to invite. Percolating through social media spontaneity, the Men’s March would draw folks who (apparently unable to cope with the emotions they felt at the sight of women moving forward in a linear direction expressing a desire to not be assaulted) would want to band together and reclaim their long-lost manhood.

Robert Bly would be there of course, but because Manly Men © have been defunding the humanities for so long, nobody would actually know who he was, and he would sit in a corner shirtless beating a drum, alone.

There would be a substantial debate about inviting women. Sarah Palin, Kellyanne Conway, Michelle Bachman, and other female meninist allies would show up, but would be accused by a few marchers of preventing men from enjoying their bro-friendly safe spaces.

Glenn Beck would show up and, within ten minutes, begin crying. Even though his tears would be patriotic and cowboy-like, a few hardliners would dismiss him. Attempting to recover their lost ideal manly hair-sweat manhood, organizers would publicly invite Nick Offerman, only to realize that he attended the Women’s March, thus disqualifying him. Organizers would desperately tag alt-righters with questions about which men they would invite to help recover America’s manly bearded manhood.

In the end, the number of men fitting the standard would be thirty-seven. Those in attendance would chant about being persecuted by society’s trends, like all the feminists not in congress, not passing laws requiring men to father children even if they don’t want to. They would complain about the woman who is not President and who was never recorded bragging about grabbing men by the purifier. Marchers would lament their dead sense of manhood in a prolonged circle-jerk of one another’s angst (but not in a fun way).

There would be many issues marchers would not discuss. Mike Pence would not mention mental illness among men or alcoholism or drug abuse. Franklin Graham would not mention institutional poverty or suicide rates among men, boys, and gay youths in particular. Piers Morgan would not bring up the consequences of concussions for football players or the fact that male rape victims tend not to be taken seriously. From the start organizers would be unconcerned with men as a totality. They would not care enough to lobby for men who are gay, foreign, disabled, or suffering a mental illness. Instead, they would see only themselves reflected in a wilderness of mirrors as they marched, self-consciously alone.