I don’t normally do film reviews/analysis on this blog, but a recent viewing of The Love Witch with its “aggressive strangeness,” as a friend described it, warrants a a closer look. 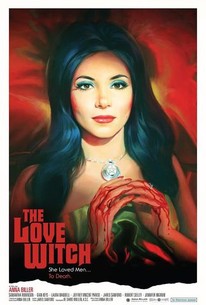 Anna Biller’s 2016 The Love Witch begins as a parody of late 1960s/early ’70s sci-fi/fantasy sexploitation B movies such as Barbarella (1968) and A Touch of Satan (1971). Biller’s film establishes a concrete cinematic nostalgia that it then goes to great lengths to critique.

Spoilers and such: The main character, Elaine, is a witch utilizing her witchiness to seduce men in her supposedly endless search for love. After having killed her husband, Elaine quickly finds a new partner (Wayne) and uses her excessive witchitudes to convince him to take her to his getaway cabin. There, she gives him a “potion,” which causes him to “feel love” too intensely and die. (Audiences can recognize that taking beverages from strangers is also a possible way to die). Elaine attributes Wayne’s death to men being unable to cope with their emotions, and moves on from there, as we all should when someone feels emotions to death.

When Elaine finds  Griff, “the right one,” the film has veered from its established genre, becoming at different points a Hallmark romcom and a buddy cop drama. Disappointed that he fails to feel love for her (and also happens to be the cop who finds that she is guilty of “loving” people to death), Elaine stabs Griff in the chest. The film ends with a disturbingly quiet fantasy of Elaine marrying Griff in a Renaissance setting, interrupting the campy tone and ending with a serious meditation on the consequence’s of the film’s own logic.

The Love Witch exploits viewers’ nostalgia for a unique cultural moment that existed only after the emergence of birth control and before the HIV/AIDS epidemic, an era that felt like it was going places and might have were it not for the sudden death of hope that came with Reagan and the moral majority.

Elaine’s treatment of men is cynical and essentialist, and the film’s male characters buy into it just as much as she does. Audiences are meant to see her views as a product of her frustration with social expectations for happiness and monogamy, and she turns to witchliness to prevent further disappointment. Witchcraft here functions as a cult-like ideology: Elaine seeks improvement in relationships and cedes her agency to something beyond her (a program/product/cult), but as a result of that program/product/cult, she only ends up killing people (which, to no surprise, ends up hurting her relationships). Witchcraft is a stand-in for any commodified, pre-packaged self-help ideology, such as Sedona’s vortexes, Scientology, or the books of Rob Bell (all of which, I’m sure, have resulted in someone’s death).

Marriage appears most colorfully in a scene at a Renaissance fair, pulling back the curtain on Elaine’s personal investment in the program/product/cult. Elaine, like many Americans, is drawn to witchcraft simply for the nostalgia of a pre-globalized Europe, one without the intrusion of Christianity but all the aesthetics of a Pagan religion without the human sacrifice and patriarchy. All the fun without the historicity. Tolkien made even whiter and somehow less sexy. Halloween ruined by Medieval and Renaissance Studies majors. The list goes on. The film critiques the audience for participating in nostalgia for a style it portrays as commodified, pre-packaged, and self-consuming.

The Love Witch dissects the way many Americans imagine the sexual revolution, which existed between two periods of extreme repression, the 1950s and 1980s, and captures the strangeness of that moment of hope while simultaneously undermining it just as violently as it was subverted historically.

The film’s generic experimentation acts as a mechanism exploiting viewers’ nostalgia. The Love Witch tricks audiences the way time and politics often do, by taking its viewers on a trip they never signed up for but feel unable to step out of, forcing them to walk away with questions and pretentious blog post ideas about witch hunts and the 1970s or something.

2 thoughts on “Genre, Nostalgia, and The Love Witch”