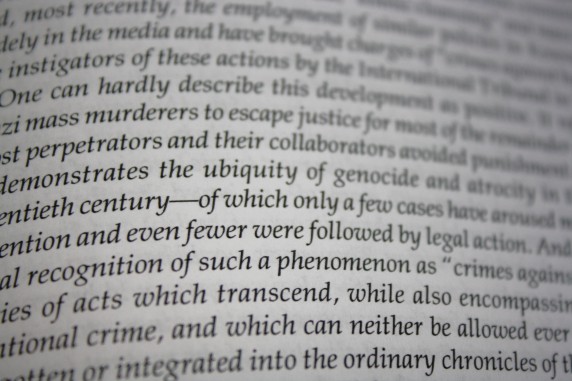 Recently, some activists called for the U.S. to formally charge the self-proclaimed Islamic State with acts of genocide. I can use the word informally on a blog post, but Secretary of State Kerry’s hesitation to use the word formally proves the power of language. If he makes a formal accusation of genocide, the word brings certain political ramifications, and expectations that may not be fulfilled.

U.S. officials have avoided using the word in the past, in order to avoid necessitating political and military action. During the Clinton Administration, U.S. officials were explicitly told to refrain from using the word genocide to describe the situation in Rwanda, which is now recognized as very obviously a genocide. Reluctance alone to use the word allowed the U.S. to justify not intervening.

This is where language falls short: refusing to call something murder does not change the fact that it is murder. Regardless of whether or not Secretary Kerry calls the destruction of Yazidi, Shi’i, Sunni, and Christian life genocide, that destruction counts as genocide.

However, there is a deeper, more complex narrative. To begin with, most of the groups pushing for a formal accusation are Christian organizations, and focusing on the Christian victims alone risks ignoring the multitude of other victims of the self-proclaimed Islamic State. Kerry would also need to contend with the fact that the U.S. has supported other genocidal regimes in the region complicit in aiding the Islamic State. Saudi Arabia, for instance, is religiously and politically invested in the destruction of Shi’i Muslims and Sufi shrines. Turkey, another U.S. ally, is involved in crimes against its Kurdish population, another group the Islamic State has targeted.

There is also Palestine. While the contexts and implementation for the Israel and the Islamic’s State’s actions against innocent civilian populations differ in a few crucial ways, they are overwhelmingly similar. Palestinians, in many cases children, are held captive without just cause; the Israeli military regularly encroaches upon Palestinian land, removes the indigenous population by force, and occupies it by destroying local property and replacing it with Israeli property. If the U.S. accuses the Islamic State of genocide, which it should, the U.S. would be remiss if it did not make the same accusation against the Netanyahu Administration, which it should.

The issue of language is complex; the word genocide holds so much meaning, but we often ignore the meaning of its absence, and in its absence genocides continue to occur. History has proven this, and it proves it now. There is no way to measure suffering, and I do not intend to give that impression. All victims of genocide deserve justice, Jews, Palestinians, homosexuals, Kurds, Bosnians alike. Ranking the suffering of others is the heart of the problem: it allows those who can stop the slaughter to pick and choose who deserves to be salvaged, and if he is a responsible leader, Secretary Kerry will acknowledge all acts of genocide in the region rather than a select few.

3 thoughts on “Navigating the Language of Genocide”