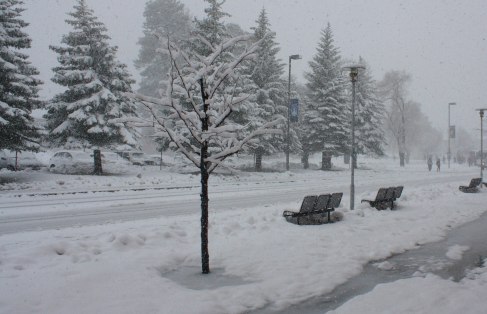 Yesterday started so safely. It was overcast and raining, but the roads were clear. By 11:00 AM, though, the city of Flagstaff was covered in snow and slush. Ponds sprouted in road dips and parking lots became marshes. Northern Arizona University cancelled all classes after 2:00 PM, after everybody was already on campus and desperate to get home. Students, faculty, and staff were told to leave before it got worse.

I opted to stay on campus and not wait in the snow swamps amid dozens of tense drivers. I chose not to risk driving down Milton or Butler to get home, not wanting to wait ninety minutes because some inevitably bad drivers congested traffic after skiing their cars into each other. Instead, I found a warm corner on campus and set up shop with everything I needed: my computer, hot chocolate, a lengthy playlist of folk music, and a window giving me an unmitigated view of the snowfall. 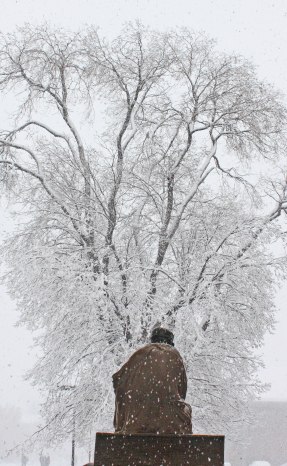 I not-so-secretly harbor an obsession with snow. It’s often a subject in my writing. I’ve written many poems about snow alone, how it feels against my skin and glows under streetlamps. I’ve set numerous short stories in a mountain town in December, a Russian field in January, a Montanan cabin in February, or Flagstaff in March. Snow delights me immeasurably, and imposes an opportunity to sit back and do what I have so little time to even contemplate. When it snows so monstrously, I refuse to let the cold and darkness drag me down. Instead, I accept them as unexpected gifts. I don’t think sitting in front of a cold window improves my writing, but it often gives me direction and motivation. Yesterday, it forced isolation upon me, and isolation prompts writing. I’m grateful for being ushered indoors sometimes. Otherwise, I might never begin sewing the words together.

3 thoughts on “The Snow, the Writer, the Time”