I’m attempting to do forty creative things (stories, poems, music, art, photography) for Lent. Here is one of them, a short short story. 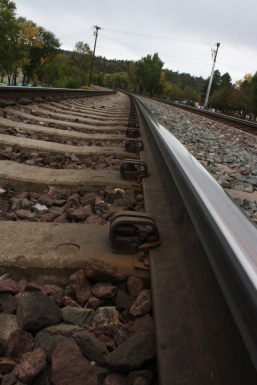 The chainlink fence delicately rattles. There is nothing in the distance, but the rattling persists like a stick dragged through broken glass. Then, in the distance, we hear it, the horn calling from the right. It’s coming. The fence shakes violently. At last, it spills into view, the bright lights on the front forming a trio of eyes glaring at us as we scurry up the gravel slope to the tracks. The train soars closer.
The all-consuming noise enthralls us. We dig in our backpacks for the ritual sacrifices: an action figure, a light bulb, a marble chess piece, and a platoon of plastic army men. We assemble them facing the train, the unstoppable bringer of death. We line them up on the bright steel tracks, then scramble back down the hill to watch the storm, the explosion, the apocalypse. The train blares its horn once more as we shiver in delight at our violation of the rules. We have been rebelling like this ever since we first discovered how easy it is to get away with it.
Moments before impact, one of us asks whose action figure we used. For a moment nobody speaks, but soon we realize it does not belong to any of us but to one of our old brothers. We look at one another, then take the hill once again, prepared to ambush the rumbling tracks like soldiers emerging from their trench. Amidst one last blast from the horn, an air raid siren before the bombs fall, we stop two feet in front of the train as it eviscerates the entire army we set up. It crumbles the chess piece, it pops the light bulb, it mows down the platoon of army men, and flattens the action figure. We do not turn our attention away, even after the last traces of our sacrifice have vanished. We stand and watch wheel after wheel glide past us where the toys had been.
After the train passes, we stand sullenly around the hallowed battlefield. An atomic bomb has just been dropped. A tornado has just hit. There is not a trace of the army men. We find some glass fragments from the light bulb and a single arm of the action figure. We pick it up and stare at it in horror. Just one severed red arm gnarled at the shoulder. What more can we say? We bury it and begin working on a good lie.