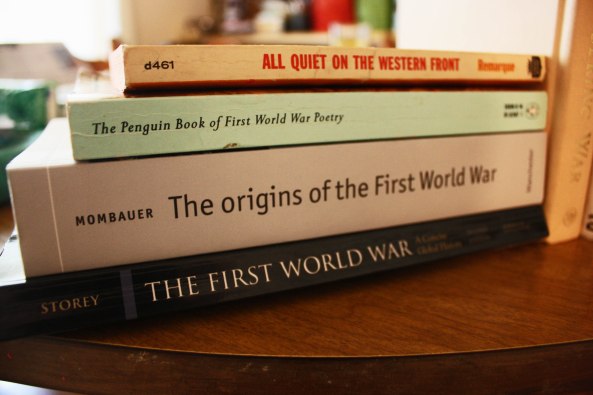 This semester I’m taking a senior seminar on World War One, for many different reasons: it’s an important event that changed the shape of the world in the twentieth century, I want to know more about it, it’s the hundredth anniversary. I’m also frequently disappointed by how often popular media ignore World War One.

European military history appears in popular arts on a regular basis. We have numerous video games, movies, and documentaries about World War Two. The History Channel has a long list of Hitler-fetish programs (Hitler and the Occult, Hitler’s Henchmen, Hitler’s Women), and in the U.S., WWII movies often come out on or near Christmas Day (Schindler’s List, Valkyrie, and most recently Unbroken, because there’s no better way to celebrate Christmas than by watching portrayals of crimes against humanity). I was excited this past summer when the History Channel announced a six-hour special on both World Wars, but was disappointed when it ignored much of World War One in favor of yet another biography of Hitler; I jokingly called the series Hitler: Origins. Complete with historical inaccuracies, it was effectively a Hollywood trilogy.

Nevertheless, there are some very good portrayals of history in popular media, such as the documentaries of Ken Burns and the BBC series Foyle’s War. These and others pay close attention to detail and often avoid simplifying history. The problem with so many popular depictions is that they present a simple Good Guy/Bad Guy narrative, to the point that World War Two is often reduced to a standard action movie format: bad guys do bad things to good people, good guys intervene, and there’s a happy ending. On the other hand, World War One resists this narrative completely: morally ambiguous empires kept promises to invade each other, millions died without significant progress, and nobody was happy about how it ended.

Popular arts can be useful if treated with the proper attention, and understanding World War One, I think, is sometimes more important than understanding its wildly popular sequel. The problem is that history never translates easily into narrative. It’s not a study of plot and characters, it’s a study of variable circumstance and decision-making without foresight, which can be messy, scary, and uncomfortable. It almost never works out the way we expect or want. Nevertheless, I long for better popular depictions of history. If the History Channel and Hollywood will not grant this wish, then I’ll simply have to do my part as a writer and contribute better, more accurate stories to the canon.

2 thoughts on “World War One: The Unpopular Prequel to World War Two”