Let’s say you want to make chili for the autumn season, something you can bring to a pot luck at a moment’s notice. If you’re anything like me (an English Major), any pot luck you get invited to will be filled with vegetarians who bring gallons of humus and pita chips by the crate. Here’s an easy recipe for a healthy chili to satisfy any English Major’s left-leaning, postmodernist palate.

The first step is to go to the local farmer’s market to obtain the best locally grown organic non-GMO socialist ingredients. Obtain the following items:

Optional: two bowls of marijuana, but only if you’re serving at a gathering of poets. If the chili is for a faculty meeting, two to three liters of rum (as a side dish) should be provided.

Various seasonings (salt, pepper, cumin, cloves, cinnamon, ginger, turmeric, grassroots activism) should be added to your own taste (which should be excellent because you’re an English Major).

First, lay out the ingredients and tell them that cuisine is a social construct. Then chop up the onions and dump them into a cooking pot with an inch of oil. Stir them enough to keep them from burning, and add salt and pepper. The onions should be strong enough to make you cry, if you aren’t already crying about the TPP.

Next, chop up the tomatoes. Add a can of tomato sauce if you really want to give money to the 1 percent, you terrible monster.

Add the cans of beans, ignoring the fact that Big Canning got your hard-earned money. In a vegetarian chili, you need protein, and the beans will provide enough protein to help you resist the man.

Chop up the vegetables; carve them the way you’d carve up Wall Street, and redistribute their wealth in the pot. Season liberally with spices. 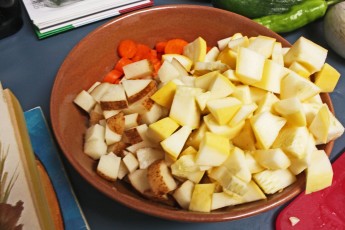 Next, chop up the peppers. Be careful to protect your hands, otherwise your fingers will burn the way the Christian right wants you to burn in hell. Be especially careful chopping the habanero, which will provide the amount of spiciness needed to smash the patriarchy. You can also add smashed patriarchy to the chili, but don’t add too much; patriarchy has very little nutritional value, because it’s mostly fatty acids and blood.

Stir all ingredients and continue to season as you see fit, because you are a creative and unique individual and however you season it will be an expression of your individuality in the rising tide of fascism. However, don’t add too much cinnamon or ginger; if you wanted a pumpkin spice latte, you’d go to a coffee shop with your Mac and write a screenplay in the corner.

Let the chili simmer the way the working class simmers before the coming revolution, for two or three hours. Feel free to freeze it for the future or emergency pot lucks. Because your vegetarian Marxist postcolonial chili will be as spicy as your attitude (on tumblr), serve with lots of bread, or over rice. This chili is not for the faint of tongue.

Feel free, even, to serve it to your conservative friends. It may be meatless, but that’s no reason to be afraid of it. Take it to a tailgate party, or an NRA meeting. Use it to bring people together. What we eat may be politically driven, but sharing a meal is universal. At least that’s what the shoeless hippies who sold me the onions said.