I’m twenty-five percent of the way finished with my Master’s Degree in English at the University of Nebraska-Lincoln. Most of what I’ve encountered is unsurprising: the workload is tough, the Midwest is flat. However, there are certain things I’ve learned, perhaps unique to my own situation, that I wish I’d known earlier this summer. 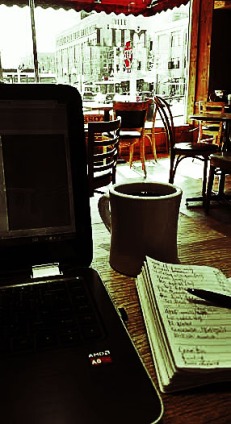 It’s another game day in Lincoln, Nebraska. The city is dripping with redshirts (not the kind from Star Trek, but closer than you’d think) and people asking for tickets. It’s hot, dry, loud, and alive. There is energy and consumerism in Lincoln today. Parking here, fifty dollars! Hot dogs, popcorn, soda, beer! Families move through the streets as the day builds toward the big game. Parties, I’m certain, are in planning, if not already in mid-construction.

Currently I am not involved in the game day activities. It’s nothing personal, Nebraska, but I have work to do. I have a novel to write, several novels to read, essays to research, critiques to work on, and Renaissance comedies to struggle through. I have work for my research assistantship on top of my graduate classes, plus my ongoing attempts to write and publish.

I’ve tucked myself into a corner coffee shop downtown to caffeinate and induce sleeping problems. I’m going to spend the whole of game day here, watching the red sea of fans part against the street corner while rushing to complete the next section of my novel for workshop on Monday, then finish the 4,501 other projects I have (blogging notwithstanding, of course). I can’t afford to see a game, anyway. Four dollars for a cup of coffee and a scone is better than fifty for a ticket. Even if I watched the game, I wouldn’t particularly care who won. I’m told we’re having a bad season, but I couldn’t tell you a single score. It’s nothing personal, Lincoln; fandom just doesn’t suit me.

Two months into my first year of graduate school, I think I’ve finally started to settle in. The workload is not beyond my management (I somehow function better with less sleep), the faculty are just as thoughtful and thought-provoking, and my descent deeper into the cult of academia is going smoothly; soon, I’m told, I’ll be a card-carrying postmodernist. The support my writing receives is frequent, and the possibility of a writing career is even starting to take shape.

For example, this past week I had the opportunity to meet with two agents and two editors, to have them critique a section of my novel-in-progress and discuss the publishing industry. They told me what they liked about the short section, offered insights, made revision suggestions, and allowed me to see the project in grander terms. I learned that when I eventually get an agent and editor, publishing becomes a collaborative effort, a group project. They offered to stay in contact when I have a polished draft. Suddenly, the fantasy of publication no longer feels so impossible.

Is this it? Is this the next step for my writing? Or is this just the next phase in my hike up the ranks into academia? I ask myself this question because I’m surrounded by people who have it figured out already. I’m surrounded by serious academics, doctoral students devoting years to studying, students fulfilling long-term plans. Many of them took a break after college to figure out the rest of their lives, get married, travel, go on adventures, experience things they can then write about. And here I am, fresh out of my undergraduate career.

Am I here because I want to be a writer, or because I want to be an academic? I feel like a kid who doesn’t yet know what he wants to be when he grows up, and time is running out. Do I teach? Get a PhD? Another MA? An MFA? Is there life after publication? Or should I let my ambitions dictate my future? Tired of studying tragedy but never taking that study out of the classroom, I still want to join a charity, volunteer in a hospital in Palestine or Afghanistan or Jordan, or work on an organic farm in Chile or Brazil. I want to see the world, because I know if I stay in the confines of an English Department, I’ll run out of things to write about.

The sun rises earlier, the nights are warmer, yellow pollen is in the air, and Flagstaff’s population shifts from students at the University to tourists on their way to the Grand Canyon or Lake Powell. Like birds in migration, people move backward or forward in summer, propelled into greener forests, taller mountains, warmer beaches. Among those birds in migration, I am absent. I am still perched in Flagstaff.

My time at Northern Arizona University is over; my time at the University of Nebraska has yet to begin. Now I’m in limbo, with no schoolwork, no tests, and lots of free time on my hands. I still have to pack up my life and move to a new state, but I will not be moving for a while, which means I suddenly have no major obligations. After four years of deadlines and assignments, I hardly know what to do with myself.

So far, I’ve been spending my time exploring parts of Arizona I haven’t seen much, like Prescott and Jerome; I’ve been camping, doodling, learning to play the mandolin, working through my reading list of over twenty books (I’m seven books in), and trying to teach my dog that fetch requires letting go of the ball.

I’ve also taken advantage of the free time by writing, or trying to at least. But I feel like I’m in an episode of The Twilight Zone, “Time Enough at Last,” in which the main character Henry finally has enough time to read all the books he can after he becomes the only survivor of a nuclear war. Being The Twilight Zone, poor Henry’s thick glasses slide from his nose and break, rendering him too blind to read. Like Henry, I have plenty of time to do what I love most, more time than I’ll probably ever have again, but something about this summer limbo is blinding me from my creative intuition.

Being in Flagstaff is a nice way to spend the summer. I may not need greener forests, taller mountains, or warmer beaches, but I do need something to realign the way I see my writing, a new perspective, something wrought from a new experience. I’ve had some fantastic experiences this summer, but being stuck between two worlds, physically and emotionally, is disconcerting. Hopefully I’ll break out from this creative complacency soon.